Just a small update today (when aren’t they!?)

Firstly, not worth a photo particularly but I’ve finished the inside canopy part so that’s ready for casting. There’s some silicon release spray waiting for me at the sorting office so I aim to produce the first cast this weekend. With any luck it’ll turn out ok and be ready for a small production run of 15 or so plus a few for you loyal readers!

I’ve done some more work on the helmet finishing off the hair and adding a bit of raised detail.. This too is now ready to cast before I make another variant (different hair) and perhaps an Exarch version from those initial casts.

(Edit: I love keeping a plog, no sooner had I posted this photo I noticed the new raised detail was slightly wonky and managed to correct it before it dried)

On the bike I’ve moved on to the fins. The jetbike fins are too small on their own so I think I will extend them by adding a piece from the missile launcher. It’s difficult to make out with all the blu-tac here but what do people think of the general proportions? 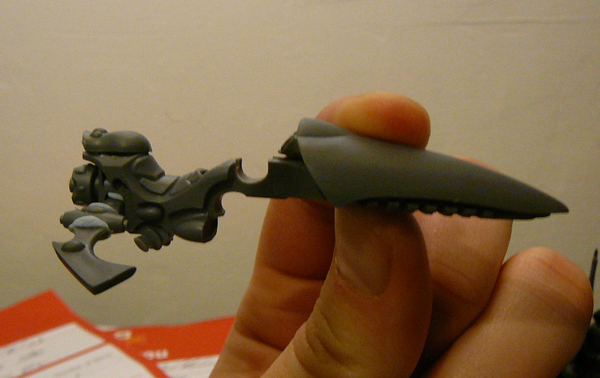 Lastly the guns. I had originally planned to use the Eldar jetbike catapults but they look very clunky by today’s standards, so I trimmed down two Guardian catapults and began the task of blending them together underneath and with the part that connects into the reaver. The result should be a much sleeker set of weapons.

Next up – warlock legs.