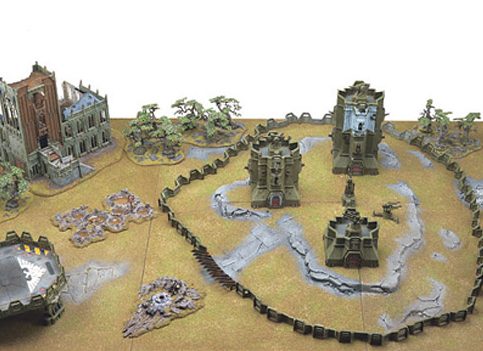 In planning the one day blitz the question occurred of how much terrain, and of what types, I’d need to make.

It’s something I’ve always liked the idea of formularising in some way. After all terrain can be boiled down into just a few in game effects – mostly to what extent it blocks line of sight and provides cover, and to what extent it impacts the movement of vehicles and infantry.  Most sources (including the 40k rulebook) will suggest a pretty even split of terrain types.  So you only need to know the total number of pieces required and you could theoretically create a “terrain set generator” that would dictate how much of each type of terrain you need for an interesting, varied and balanced  game.

I haven’t gone quite that far, but I have still put an unreasonable amount of thought into possible combinations of in-game terrain effects (based on current 7th edition Warhammer 40,000 rules) and the sorts of terrain you could create to match each combination.

Line of Sight
I take the view that there are four types of terrain as far as line of sight is concerned.  Firstly you have stuff that completely blocks line of sight to almost all models.  This is the kind of thing that only Wraithknights, Imperial Knights, flyers and so on should expect to be able to see over, and even then only if they are close to the terrain.  It’s sadly lacking on most battlefields which often leads to shooty armies being more powerful than they ought to be and a paucity of locations in which to hide troops.  Following the line of sight blocking terrain you have terrain that provides heavy cover, offering a 4+ cover save or better.  Then your light cover providing terrain offering a 5+ or 6+ cover save, and finally terrain that has no effect on line of sight at all.  I realise that LOS and cover are not really the same (after all, you could have an “energy field” fence that doesn’t block LOS at all, but does provide heavy cover), but in most cases there is a close relationship between how much of a model you can see and how good it’s cover save is, so I’m putting them together.

Infantry Movement
Terrain can be further classified according to its impact on infantry movement.  Again, for our purposes there are basically four types: stuff that’s impassible to infantry, dangerous terrain, difficult terrain and occupiable/clear terrain that doesn’t impact movement.  40k also has a provision for “very difficult” terrain but it is not often used and in any case it would be up to the players to agree before the game to decide if something modeled as “difficult” is in fact difficult or very difficult.

Vehicle Movement
Our last in-game effect to consider is the impact on vehicles.  Here there are only three options for 40k: impassible, dangerous and clear.  Although these options are the same as for Infantry movement, some terrain affects vehicles and infantry differently so it’s important to consider them separately.  For example, a man high wall can be scrambled over by infantry and count as difficult terrain, while wheeled vehicles cannot pass the wall at all.

Combinations & Examples
Knowing there are four classes of terrain for line of sight, four classes for infantry movement and three classes for vehicle movement means there are (4 x 4 x 3) 48 possible combinations of in-game terrain effect that we can try and imagine and model.  Now, anyone who sits down to try and think of an example for every one will quickly realise that there are some combinations that are really hard to come up with terrain ideas for, and some that lend themselves to tonnes of terrain types, but in the space of half an hour I was able to fill half of this table.  Can you think of any examples for the empty rows?

So How Much Terrain?
For 40k, the standard terrain setup rules suggest using D3 terrain items per 2’x2′ board section, and define an “item” of terrain as one large piece or a collection of smaller pieces, so essentially each item ends up covering around 1′ square of the board.  Averaging the D3 roll to 2 per board section means needing 12 “items” of terrain or, put another way, the games designers intend 40k to be played with about half the table surface covered in some form of terrain, split evenly between the possible terrain types.

Many people use an older rule of thumb that suggests covering a quarter of the table in terrain.  This leads to battlefields that are far too open, in my opinion, and in combination with a lack of genuinely line of sight blocking terrain might well be a big contributing factor to people not enjoying the game as much as they could.  I’m not sure where this rule comes from, but it was probably from an older edition where shooting was less lethal, or armoured transports more effective.

If you read counter arguments to those advocating 25% of the table to be covered in terrain, you’ll usually see people advocating more like 40-50% terrain.  As this fits with what Games Workshop suggest in the rules I am going to take that as my figure and work from there. I’ll err towards 50% because my terrain “types” table includes several combinations that don’t block line or provide cover.

In the next post I’m going to take all this and put it into practice when I design the plan for what I actually want to make in my 12 hour Ice World terrain blitz.