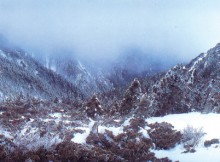 In the last post I waxed lyrical about the overall amount of terrain required for a good game, terrain types and ensuring a gaming table includes a good mix of those types.  All of which brings me back to the crux of the matter, namely what am I going to build when it comes to my 12 hours of terrain production?

As established I need a minimum of 12 “items”, where an item can sometimes be a single large piece and sometimes a collection of 2-3 smaller pieces.  In addition, to afford some further variability to the battlefield I’ll also need some extra stuff so every game doesn’t feature the same terrain, so a target of 16 items seems more sensible.

My  gaming club (Tanelorn Wargames Club) already has a few bits of terrain that I can resuse for my Ice World terrain set, namely roads, Cities of Death ruined buildings and craters, plus assorted sundry items like stacks of tyres.  I’ll count these as catering for the extra 4 pieces meaning I really need to focus on the 12 core pieces.

I’ve tried to ensure that the 12 pieces are spread as evenly across the terrain type table as possible, with a self imposed rule that I’ll make no more than 3 items for any given combination, and will make at least 2 items for each line of sight terrain type (i.e. at least 2 line of sight blocking, 2 heavy cover, 2 light cover and 2 open ground pieces).

When picking terrain to make, I found it useful to have a distinct theme in mind.  I decided my ice world would feature a promethium station of some kind, and numerous relay pipes.  I’ve also been hankering to add some real height to my gaming tables for a while, so it had to feature cliffs of some kind.   A picture formed of a remote wilderness station battered by snow storms.  Ruins and buildings don’t really fit into the context of this battlefield so well, but since I have them available via the club anyway they may as well be included.