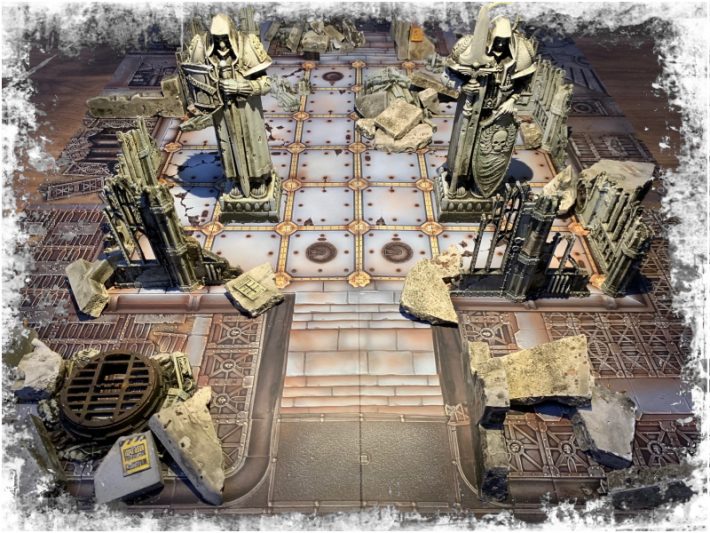 Yesterday a friend and I kicked off a new Kill Team campaign pitting my Adeptus Ministorum and Ordo Hereticus against a Chaos Cult of Nurgle and their Death Guard masters.  Act 1 is set among the ruins of an Imperial city destroyed in a previous sector wide Imperial Crusade.  Over the previous weekend I realised I had no suitable terrain for this game and so I needed a super quick way to build a load of ruins and rubble.

Casting walls from plaster (of paris) was my solution.  Not only is this very quick but also incredibly cheap and plaster looks very much like concrete once coloured and weathered.  I built simple moulds from lego bricks glued down to a plasticard base plate – nothing special, just basic rectangular forms with windows and a doorway.  Then I mixed up plaster with some black acrylic paint added (for colour) and PVA, poured it in and gave it a few firm taps to level and remove air bubbles.

On some, I laid lengths of wire and poured a second layer of plaster – my intention being that once the walls were broken up, it would reveal the (now rusted) wire looking convincingly like exposed rebar (it works well, as I later found out).  Anyway, once these pieces were dry-ish (about 1 hour) I demoulded them and invariably because plaster of paris isn’t that strong the pieces tend to break up, which is fine since we’re making a ruined city not an intact one.  The pieces were then left to dry out properly on a radiator.  I guess if you want more robust bits of wall, you use dental plaster instead.

…and that provided sufficient ruins and rubble that just about passed muster for our first game. 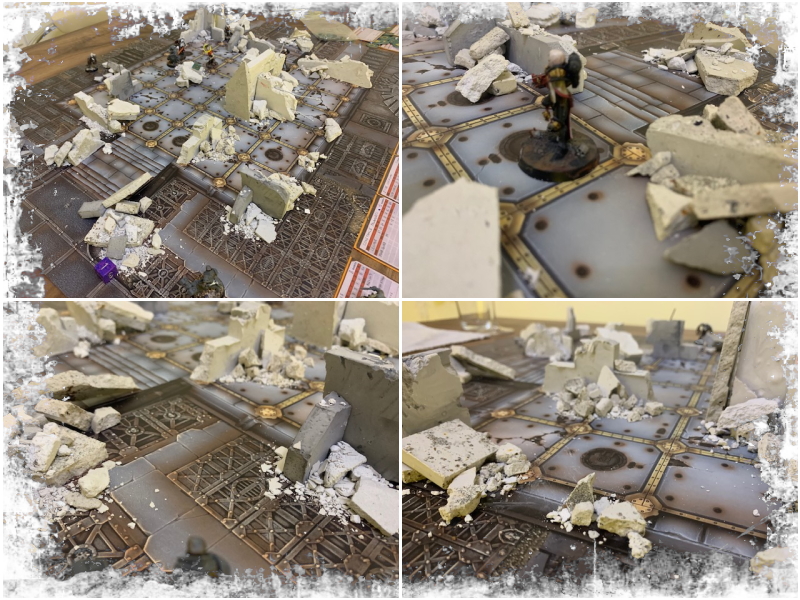 It’s a bit clean for a war ravaged city, but I’ll sort that out later…

The next day, I decided to tackle the ruins and statues that come with GW’s “Sanctum Sanctoris” Kill Team expansion.  In one evening.  There’s definitely a few tricks to churning out finished terrain, not least of which is not being too precious about the final effect – I’m very much of the view that terrain needs to look simple and effective, rather than being painted with the same level of detail as the models, or else the models won’t stand out and you’ll spend years painting the actual terrain.  Here’s the approach I employed: 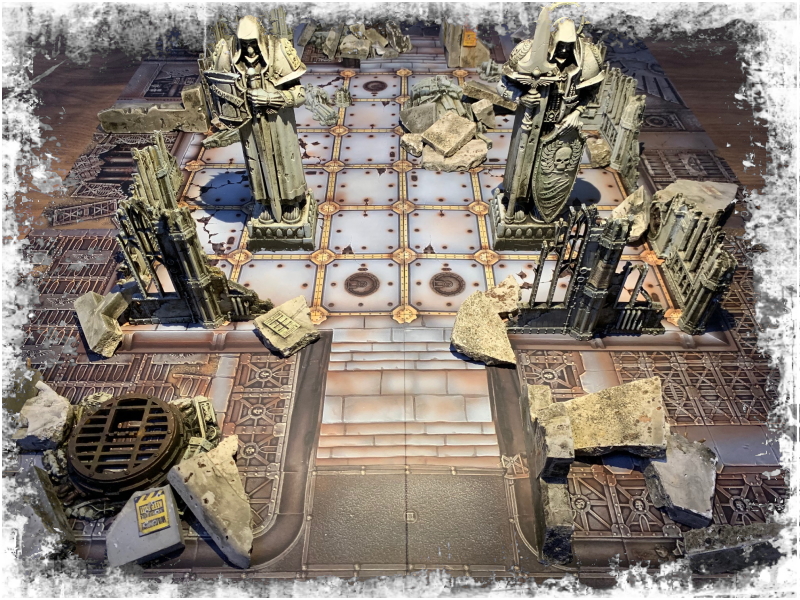 When I’d finished with the GW ruins, I watered down the gloop mixture and dunked all my plaster cast walls and rubble in it, also rubbing it off with a cloth to apply highlights and weathering effects.  Finally, I stuck lots of Imperial propaganda posters and street signs I had left over from previous Necromunda terrain projects all over the place. 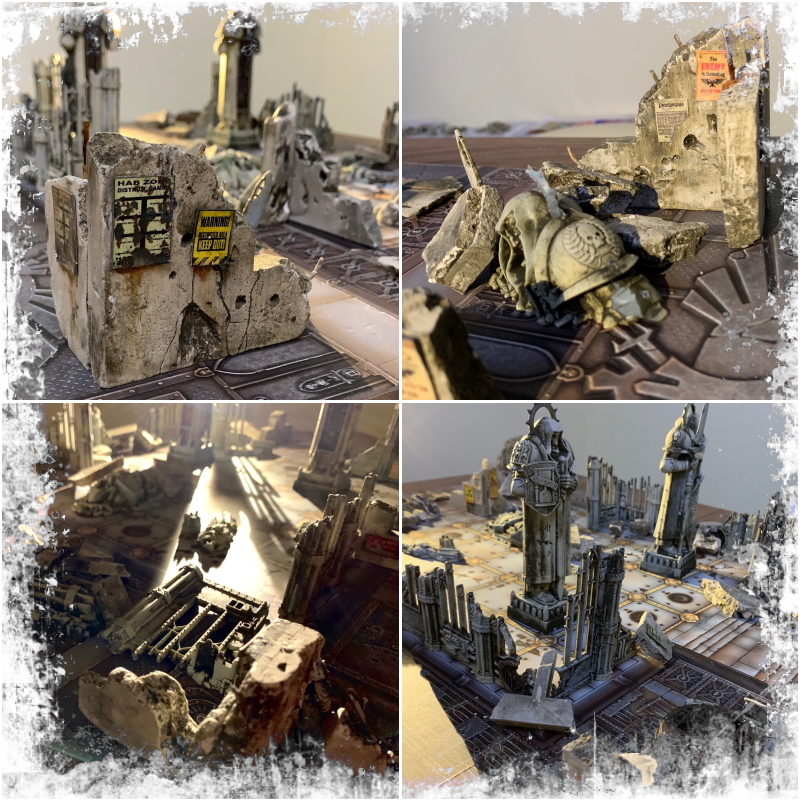 The finished terrain makes for a very crowded Kill Team table – there is enough here for a double table really, and it looks the part, which I’m more than happy with for the amount of time it’s taken.  It definitely inspires me to carry on painting my actual Kill Team models as I’m really looking forward to continuing our campaign over this terrain. 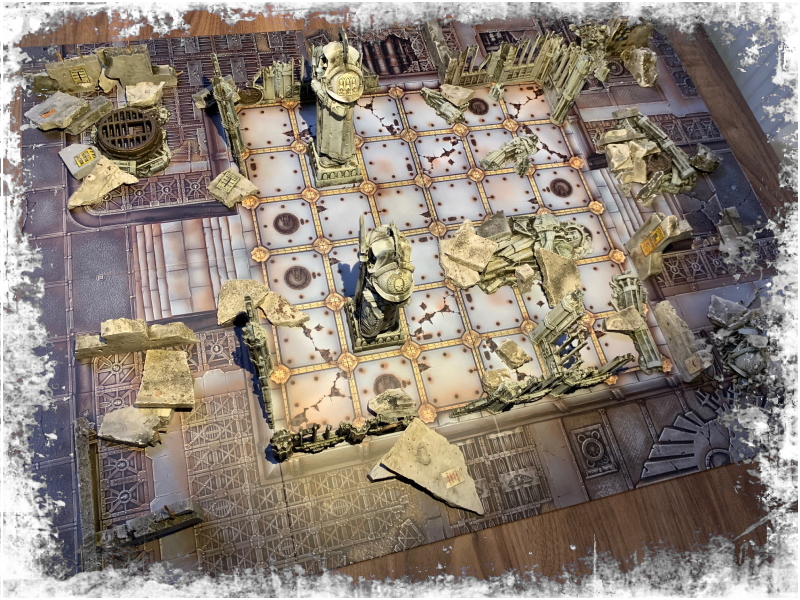 The signs dotted around are mounted on cereal box card and then I simply ran some silver paint around the edge.  When I mounted them to the walls I applied some Modelmates rust effect around the sign and then dabbed water at the bottom so that the rust streaked naturally down the walls. 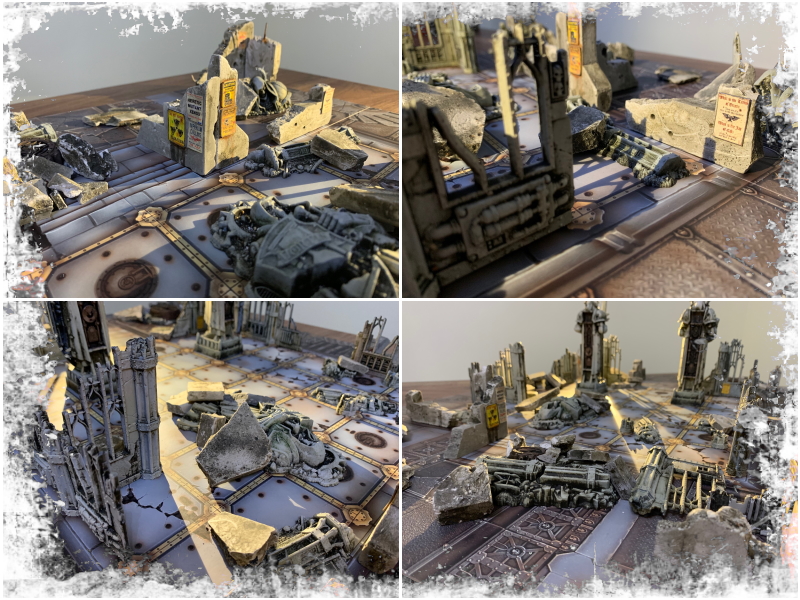 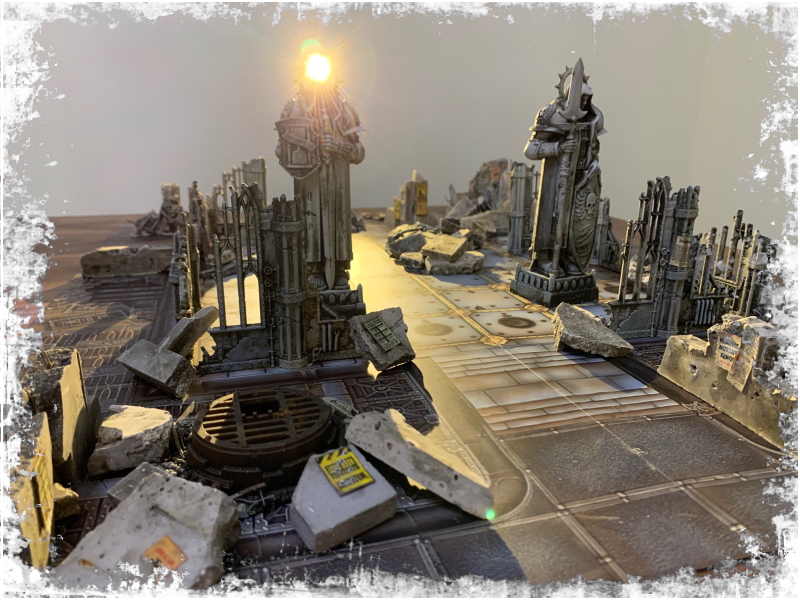