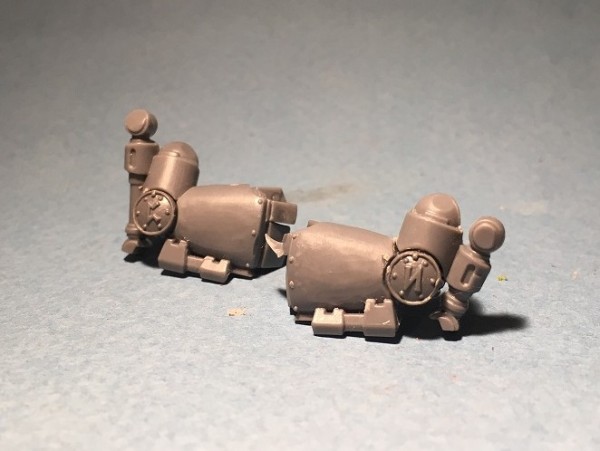 The Centurion power fists are highly detailed with Marine iconography.  You will need to remove this with a sharp scalpel as with the other detail we have sliced and scraped away.  Be careful to retain the stud details that run along the “knuckles” of the power fist.  Here’s one with and one without the detail. 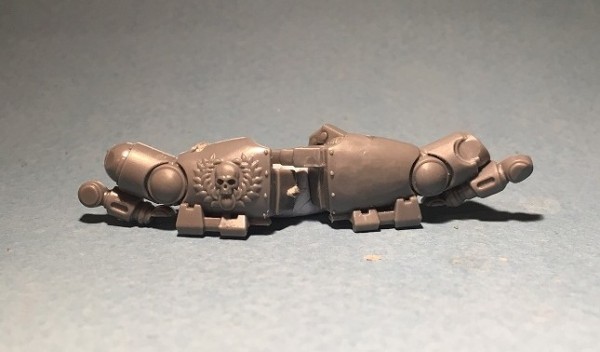 The elbow joint of the arm is the perfect place to add some more Dwarven detail.  If you picked up the same Dwarf banner I did (where we used a large rune on a circular plate to detail the suit exhausts) it comes with two smaller discs that fit the suit arms perfectly.  The stock suit arm has a rounded dome shape elbow joint, so simply slice this flat then glue the dwarf icons in place.

Attaching the weapons for the suit is fairly straight forward but you only need to be aware that not all weapons fit every arm. The weapons are designed with heavy duty clasps that clamp the weapon to the bottom of the suits power fists and a small servo arm connects to the rear of the weapon.  It’s the relative position of the clasp and servo connector that determine whether the arms and weapons match.

(This will be pretty obvious to anyone that studies the instruction book, but in typical fashion I didn’t, and as a result it took a while to figure out!)

In the kit you get heavy bolters, lascannons, grav cannons and rock drills, with the option to add a flamer or melta gun as an auxiliary weapon on the drills.  I’m going with a rock drill and a “lascutter” (as it’s referred to in the relevant Necromunda rules) or a mining laser as it appears in the recent Deathwatch Overkill boxed set.  These weapons fit my concept of a Squat Miner special character for Necromunda.  I used the barrel of a lascannon and attached it to the main bulk of one of the grav cannons.   In the course of doing so I realised that the grav cannons are only designed to fit the suits right hand, long after I’d committed to attaching it to the left. This necessitated some fiddly cutting and  reversing of the clamps that attach the weapon to the fist. Still, eventually I had this:

And a near complete Squat miner: 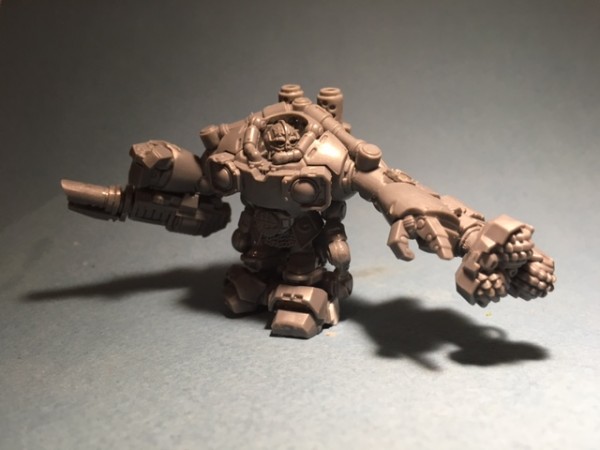 As ever with this kit, you may want to carefully remove Imperial iconography from the weapons so the suit looks more functional than ornate – the lascannons and heavy bolters have small skull and bone details.