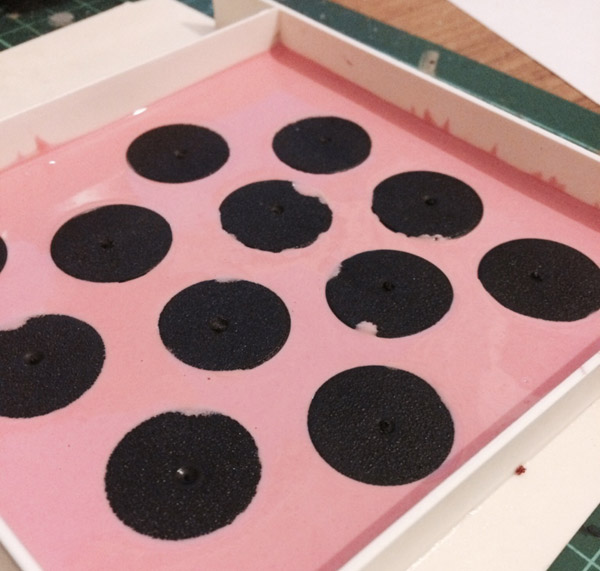 Fresh from finishing my blood bowl pitch, I was pretty eager today to get back into some 40k modelling.  Like most gamers I have tonnes of unfinished projects, the most recent of which include a new Necron army, repainting my Tau, moulding and casting Eldar jetbikes, and rebasing my Eldar.  The least demanding of these, space and time wise, is rebasing the Eldar, so I decided to try and close this project off first.

Following on from the last post in this project, I’d got to a point where I had around a hundred 25mm bases cast up and ready for paint, with the 40mm and 60mm versions in the early stages of being built.

Apart from mass producing the bases themselves I’m also really keen to mass produce the paint job.  Obviously you would use an airbrush for this but one thing that has been playing on my mind is how to paint the base rims.  I normally paint them by hand once a base is finished, but hand painting so many bases won’t be fun. Also, hand painting can lead to a slightly messy finish that I’d like to avoid, with the risk of slipping and going over the airbrushed finish on the base surface.  I thought of masking the base rims and this led me eventually to the idea of using a custom made rubber mask/painting jig using the same flexible but firm rubber I am using for moulding.  The idea is to pour something that will keep the base rims safely covered so that the entire base can be primed the desired rim colour, then popped into the mask before airbrushing the top of the base.

One option for doing this would be to pour rubber over several upside down plain bases and then cut a slit in the cured rubber to allow the bases to be popped in and out of the mask.  This would probably be the most secure jig for the purpose but has the downside of possible degradation of the rubber in time due to stressing it, and consequent leaking of the airbrush coats onto the base rims.

A second option would be to mount the actual sculpted bases upside down and pour a mould that only covers the surface detail.  Bases could thus be mounted in the jig with the rims proud of the surface and they could be sprayed at the end.  However this pour is difficult to rig up in the first place (the 3d bases would have to be balanced, probably in blue tac, exactly level with each other) and it would mean that only the moulded bases could be mounted in the jig.

The third option, which I went for, is to pour rubber over several right side up plain bases, but only pour enough rubber so that it comes right up to the edges of the base and doesn’t cover any of the surface.  When the jig is dry, I will be able to pop bases into the bottom of the jig and have their surfaces appear on the other side ready for painting.

I built a mould box, using plasticard this time due to not being able to find my lego, and glued 12 bases down inside it.  As the mould isnt actually going to be used to cast anything the gaps between bases can be fairly small, although the bigger the gaps the easier the next stage is (somethnig I didn’t think about until it was too late): 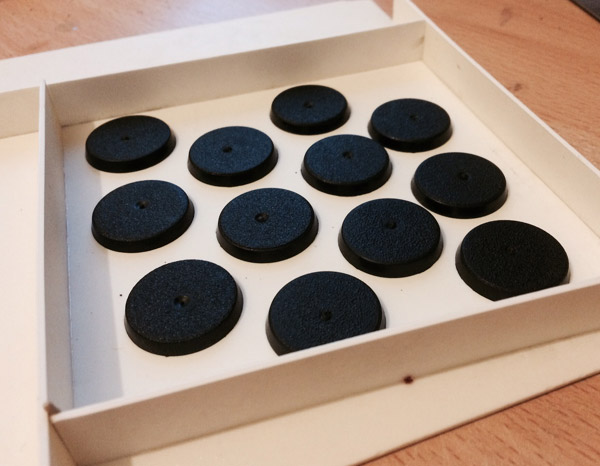 I then mixed up some rubber and carefully poured it around the bases to the level of the surface but no further.  This wasn’t easy at all, as the rubber is very thick and has a tendancy to flow over anything in its way just as much as around it. Thats obviously counter to our purpose so you have to pour very slowly indeed.  Even now, you’ll see several areas where the rubber has leaked over on to the top of the base slightly.  After this photo I went round and cleaned up the pour with a clay shaper, pushing the rubber back away from the surfaces of the bases:

Once dry this jig should allow me to knock out 12 bases at a time in quick succession.  Primarily I will use the airbrush, but the jig will also work for other indiscriminate painting approaches, like drybrushing.  I’ve sprayed 12 bases with black primer in anticipation.