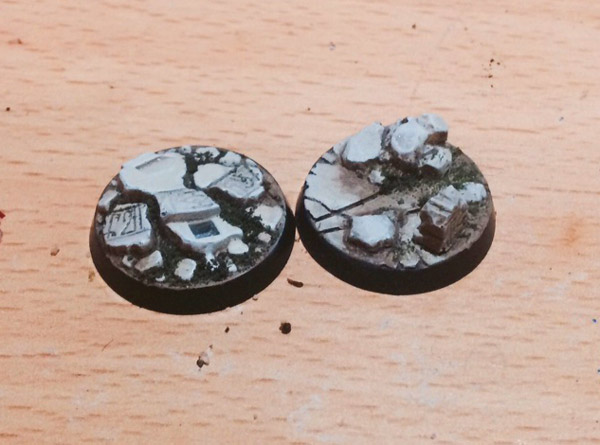 The jig appears to work well.  I first sprayed the entire bases black, using Army Painter black primer.  The Army Painter primer in my experience is tougher than Citadel spray and it also has a satin finish.  In fact once sprayed black the appearance is very similar to ordinary unpainted plastic bases.  To test the durability of the black primer over the resin I attacked them fairly robustly with fingers and finger nails and knocked them together as violently as I could to simulate the worst of the treatment they are likely to receive during gaming and transport.  None of this left any discernable marks or scratches, which is nice.

I then mounted the bases in the jig and gave them a good coat of white spray, at which point they looked like this. 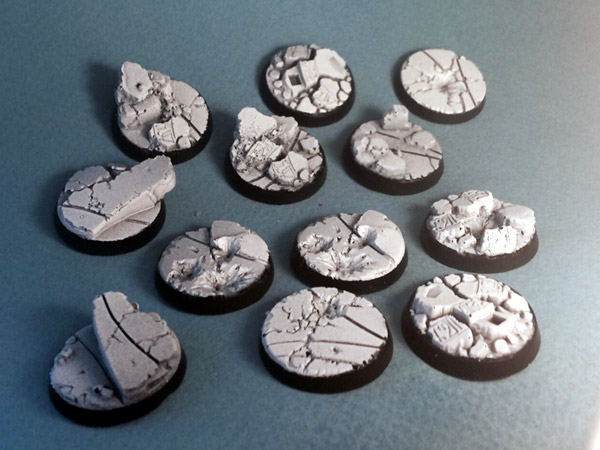 I then airbrushed some beige colour, then a light white layer, then finally did a white drybrush by hand.

It was hard to keep the definition of the lines and runic script with the airbrush so I went over some details with a brush applied brown wash.  Then I added a coat of Agrellan Earth around the edges, in the crevices and so on, to simulate built up dust and dirt in among the ruins.  Finally a bit of flock was applied using Woodland Scenics “weeds” fine scatter material.

This has a nice finish on the whole. The Agrellan Earth doesn’t crack as much as I’d like as I can’t really apply it that thickly, and where it does crack the surface below is too similar in colour to show up anyway.  It does have a nice dusty appearance though which ultimately led me to my next experiment.

I have been messing around with weathering powders for my Necrons and decided to see how they’ll work on the bases.  I took several white primed bases (they hadn’t yet been airbrushed) and aggressively applied the powders with a large brush.  This was something of a revelation as not only did the pigment delineate the detail very well, it also coloured the white primer removing the need for any kind of airbrushing at all. 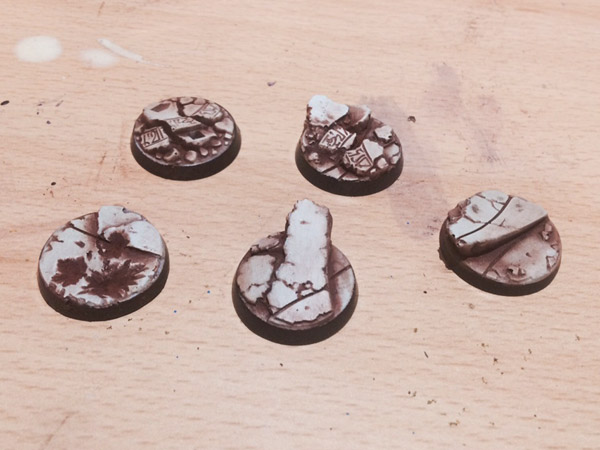 I do want to adjust the colouring now, as the dark rust colour was the only colour I had to hand and it is too red. A mixture of more standard earth and dust colours should be exactly what I need here so I will be ordering more Mig pigments soon.  And then of course I will have the standard problem with pigments of how to fix them without fading the colour, and I also need to apply foliage and groud cover to make them more visually interesting and distinct from one another (remembering I only have 15 variants of 25mm bases to work with).