The starting point for this trike was the bike that comes on the Implements of Carnage (1st gen) frame from North Star.  It’s a fine sculpt and cast but has a sports/racing bike aesthetic that doesn’t do it for me. I wanted to turn it into some sort of wasteland bike.  This definitely meant changing the rider and also doing something fairly drastic to the bike itself. 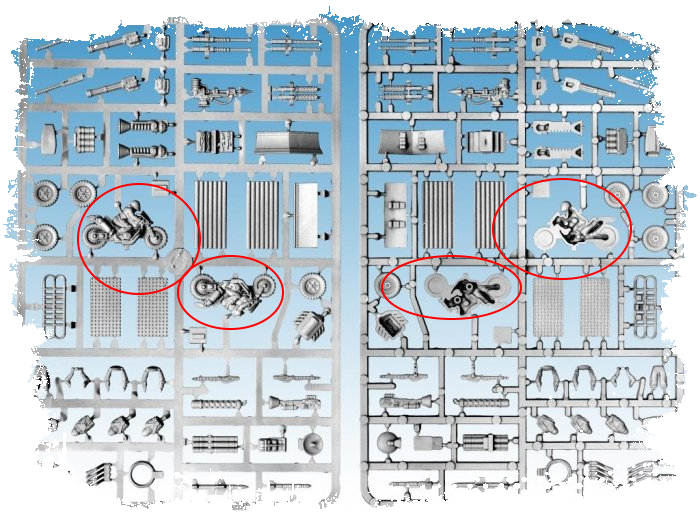 I was playing around with some bits and noticed a very large set of exhaust pipes in my bits box that had been taken from a hot wheels car (I forget which). The preposterous size difference between the bike itself and the exhausts got me thinking “what if?”. When I offered up the piece to the bike, the idea of turning it into a trike with this huge set of exhausts making up the bulk of the back of the trike hit me.  From there, it wasn’t a big stretch to imagine that these exhausts were not just for venting engine gas but actually some elaborate flame throwing weapon – in game this can be played either as the “Highway to Hell” perk, a napalm dropper or, if I’m feeling particularly silly and want to buy a weapon that costs more than the bike it’s mounted on, an actual rear mounted flame thrower.

I cut away the back of the bike and bodged the exhaust stack and two oversized wheels on to the back with some simple plasticard supports.  I tried to sell the idea of a flame weapon of some type by mounting a large gas canister below the exhausts. This also handily fills the gap below the wheels when viewed from the back. I ran a ribbed hose to the canister (made from putty rolled with a tube tool) and used more hoses to cover up the join between the bike front and exhaust back. The use of hoses and the canister makes this quite a low effort build – no need to painstakingly make the join look “real” when you can just cover it all up.

To further distance the bike from it’s original sport aesthetic I replaced the fairing/window with a  grinning demon face using a skull from the Citadel skulls kit, and cut off the torso and right arm of the rider, replacing them with bits from a wasteland warriors kit and merging them with some simple (and to be honest quite sketchy) putty work.