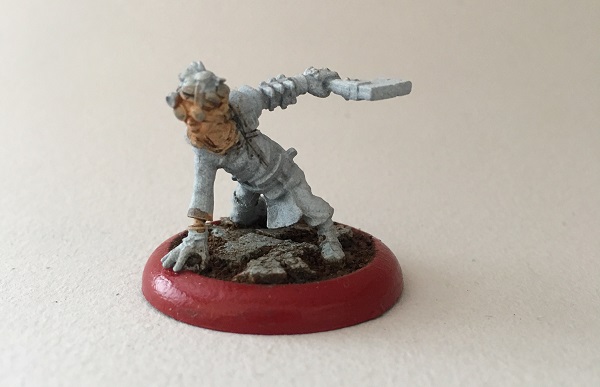 Boiler is the team’s apprentice.  He’s just a kid, yet has an interesting array of enabling abilities for the rest of the team and in the right circumstances can dish out a significant amount of damage himself.

The model features a fantastic ninja action pose but I found it quite a challenge to put together, as the parts are very small and as is common with Guild Ball models despite being digitally sculpted the contact points between parts are not very precise.  Some careful pinning and lots of swearing was necessary to successfully put this one together.

Eventually I found a workable approach was to carefully bend the slotta base tab out of the way allowing access to pin the right leg in place. I then glued the model to the base, and while the glue was still drying, glued the right arm in position and used the weight of the model (and a little force) to sandwich the arm between the body and the floor.  Once all that was dry I pinned the left arm to the model.

Some people assemble Boiler to a scenic base with a post or rock for him to vault over (there is in fact an alternative version that makes this slightly easier), which looks pretty cool and the small model size does arguably warrant a bit more attention paid to the base.  For the normal Boiler model, this would mean the only contact point will be the right hand.  This is workable with some more pinning, but to be honest I simply ran out of patience here so a more simple base will have to suffice!

The biggest area needing attention is Boilers backside, where the stock model appears to have had one ass cheek surgically removed.  This flaw was really obvious to me when watching one of Steamforged’s sculpting videos on YouTube and in the render above.  I had hoped it would be corrected before the final model was released but no luck there.  A little putty served to round out the right gluteus and give poor Boiler a bit of rear symmetry! 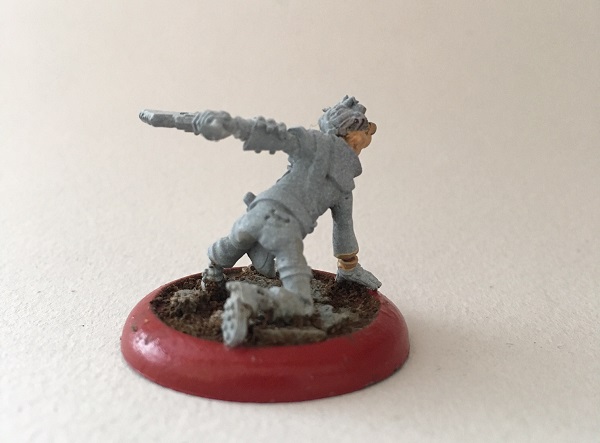 I also decided that I didn’t want the crossed axes on his back, as it made everything very busy for such a small model, so I filled in the recesses designed to receive the axes, re-sculpting the collar, strap and leather shoulder armour in the process.

The only other putty work was a bit of minor gap filling on the joints.