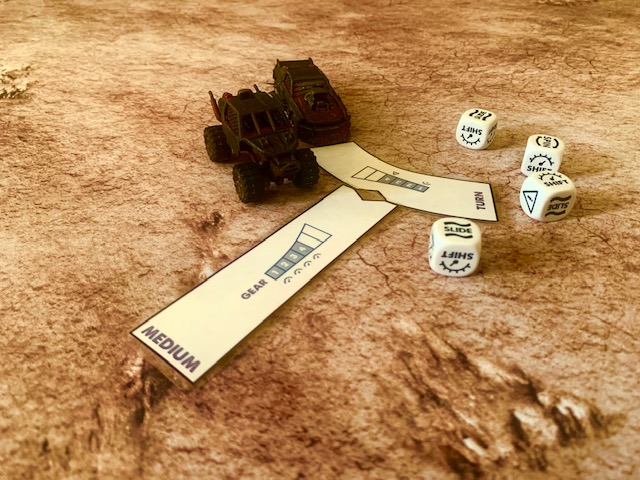 I rarely write about tactics, not least because I’m not terribly good at most of the games I play.  About the only times I do are when there are some interesting diagrams or data visualisations to be done, and when I need to remind myself about something (writing it out helps me remember things better).  This subject ticks both boxes.

These tactics are of most use to Maxxine and Miyazaki sponsored teams, because those teams have means to more reliably generate spins and slides, and the ability to use medium and long straight templates in place of the normal slide template, but are useful to know about in a pinch for other sponsors too.  All of them rely on hitting a slide result, and without this you end up driving in the opposite direction to the one you want to go in, and facing the wrong way, so they’re high risk maneuvers under any circumstances and in my view only advisable for vehicles with handling 4 or higher when there is no other option or as last ditch efforts!

Swerving is useful to avoid oncoming obstacles or re-position a car from one side of a racing line to another. The combination of a gentle turn and slide achieves a comparable final position and movement path, with a slight 15 degree angle change to your path of travel (before spinning). 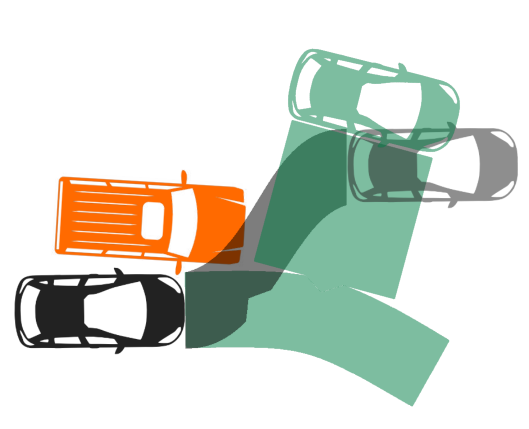 It’s not a massively exciting combination compared to just swerving normally, since the final position is half a car length behind where you’d swerve too anyway, but allows the marginal ability to avoid obstacles on your immediate inside such as the truck in orange. Crucially, it’s also much more flexible – gentle is available and trivial in 1st and 2nd, and only hazardous in 5th, whereas a swerve is not available until 3rd and is hazardous in 4th as well as 5th, making this a useful trick to remember when in 1st and 2nd gear.

Where it really gets interesting is for Maxxine and Miyzaki teams who can employ the medium (or even long) templates instead of the normal slide template, allowing massive effective swerves to one side or the other and the potential to avoid obstacles on your immediate inside that would normally infringe massively on a swerve. In this medium slide, the final position is almost as far forward and twice as far across to the normal swerve. 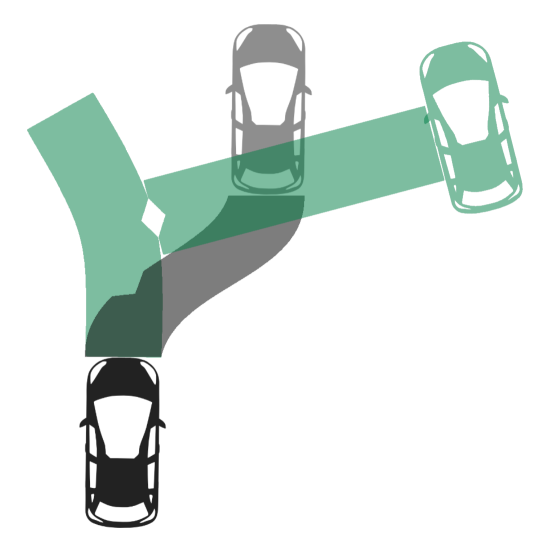 The combination of a gentle turn and a slide is most similar to a swerve, but vary the initially selected turn template to alter the angle of the slide and final position.

With a spin at the end, slides can be used to imitate and improve on the normal turn options available.

A gentle turn with a slide and a 90 degree spin is similar to a hard turn.  Once again, this option provides more flexibility since a hard turn is not available to vehicles in gears above 3rd, so cars in 4th or 5th do well to remember this option (if you’re very good at judging the path of obstacles, it also allows you to avoid an obstacle on your immediate inside such as the orange barricade). 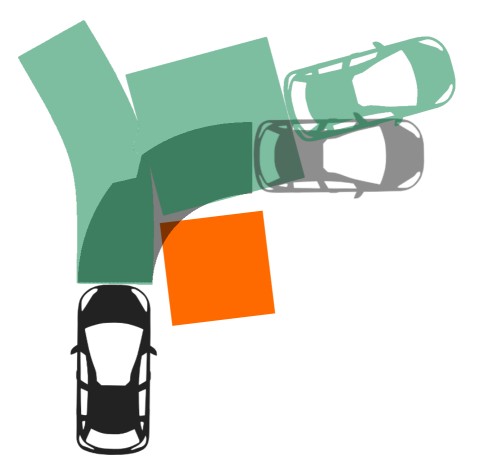 The final position of the car here is slightly further forward than if a normal hard turn were selected, while the angle of the turn is 75 degrees vs the 90 degree hard turn.

As with the swerve, the gentle turn + slide combination becomes far more compelling for Maxxine and Miyazaki teams. A medium template used for the slide provides lots of clearance around any obstacles on the inside turn and gains a car length in distance. 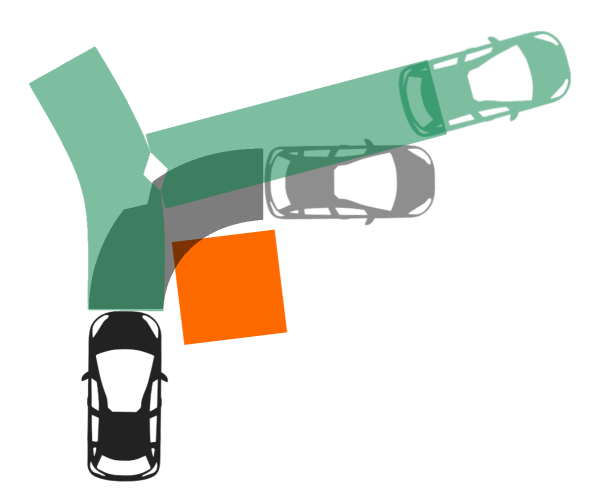 The next useful one to remember is that sliding out of a turn with a 90 degree spin provides an identical exit angle to a turn placed normally.  You can gain almost a cars length using a medium template, and avoid obstacles on the inside of the turn. In the example below the orange vehicle has the racing line and prevents our car turning right, but turning left and sliding out gets us around the vehicle and significantly ahead. 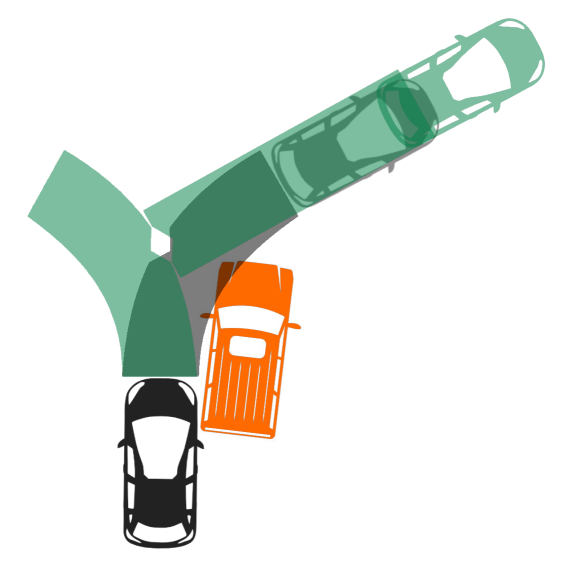 Similiarly a hairpin, slide and 90 degree spin provides an identical angle to a gentle turn, again gaining a cars length and ability to slightly avoid obstacles on your inside. 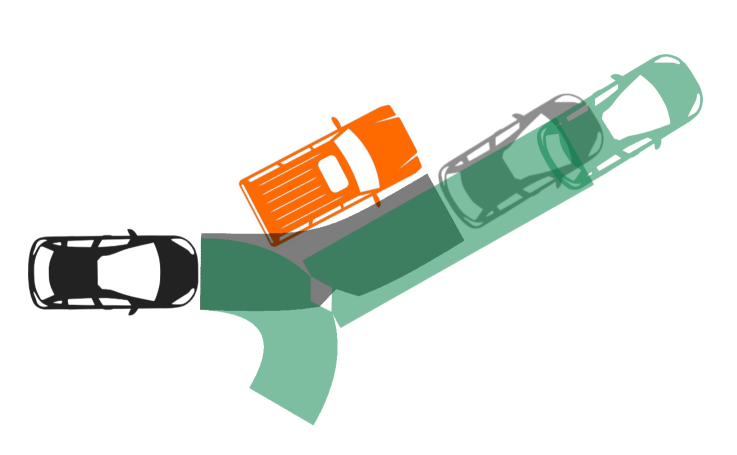 Because of Virtuoso, Chrome Whisperer, Powerslide and Moment of Glory, Miyzaki can use the tactics in this article more reliably (and on more or less any vehicle with these perks), but Maxxine buggies and performance cars have the potential for some truly spectacular drifts in the event you manage to roll 3 slides in one activation, and with Momentum and Taunt they have the Perks to build up to this.

Among other sponsors Idris is very well placed to execute slide shenanigans due to it’s combination of Speed and Precision. With Expertise and Overload, Idris vehicles can roll more shift dice than any other sponsor (6 for a buggy or performance car)  and can of course take Moment of Glory as well.  As Idris cannot make slides with anything but the normal slide template the value of the tactics is limited – but knowing the slide combos may still be useful to get out of sticky situations.

I’m finishing this article up with a list of the turn angles available using both normal turn templates and the turn/slide/spin combinations assuming a 90° spin.