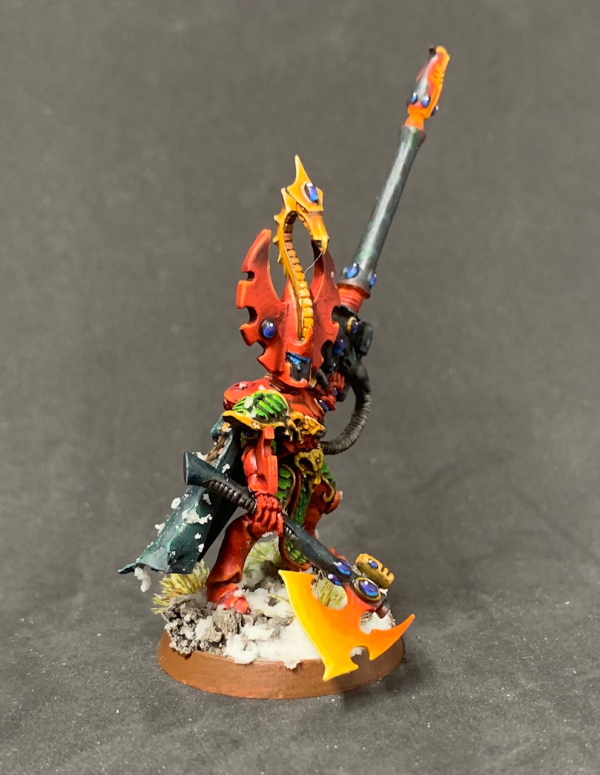 Next on the chopping block was Fuegan.  This model suffers from many of the same issues as Asurmen, notably an overly squat stature with very short legs, and resolutely being stuck in the 2D plane due to the casting restrictions of the day. Also, the arm carrying the fire axe is bizarrely short – Jes Goodwin really dropped the ball on his anatomy on this part (and not only this, but it bears mentioning that the join between the axe and hand would get my vote for the most frustrating model join on anything GW has ever produced – the axe is supposed to be glued in an incredibly shallow indent in the clenched fist and I have never seen one survive any form of transport or game without pinning).

From top to toe, here’s how I went about trying to improve the model…

I always thought the original helmet looked like it had a ‘tash built in to it, so I replaced it with this one – merging the side vanes from the original helmet, the helmet of a dire avenger and a big dragon shaped crest from, I think, some old high elf kit.  Cheesey? Yeah.  Let’s just say I’m doubling down on the dragon iconography that appears all over the model!  This process of merging smooth parts is challenging. Aligning them properly takes care and patience, then I use brown stuff putty to smooth any joins and lastly several layers of runny plastic are painted over the joins.  I make this plastic by pooling some Tamiya extra thin cement on a small pile of plastic shavings, and use the applicator brush that comes with the cement to mix the liquid to the right consistency and paint it on the model. 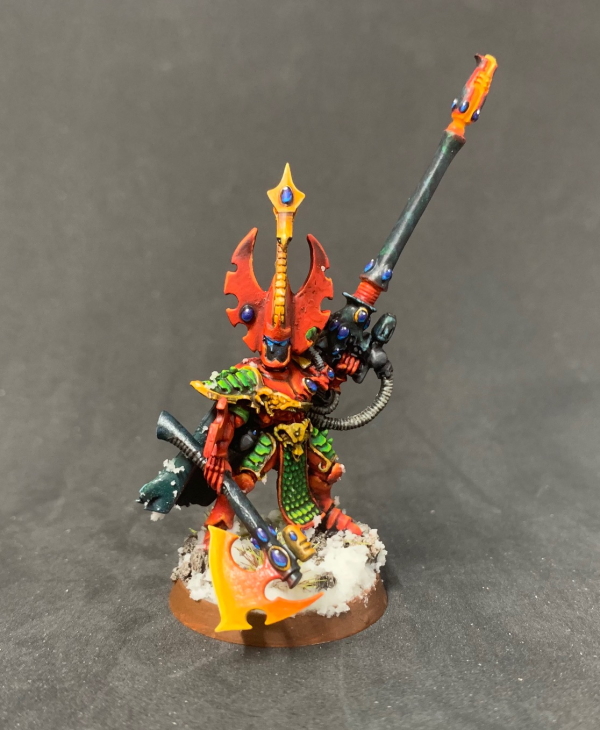 Everyone knows that all the coolest 40k characters have big cloaks, so Fuegan got one made from a dark elf corsair (the kits with reptilian scale detail on their cloaks). This was glued on at an angle to match the wind blown banner, and then I used brown stuff to join it under the shoulder pads and add a couple more scales for continuity. I also made a hole to receive a back banner in the future – while Asurmen and Maugan Ra have back banners, the stock Fuegan model lacks one, which I decided to rectify. Unlike Karandras he’s not a stealthy dude, nor does he fly like Baharoth, so there is no reason for him not to have some pageantry on display. 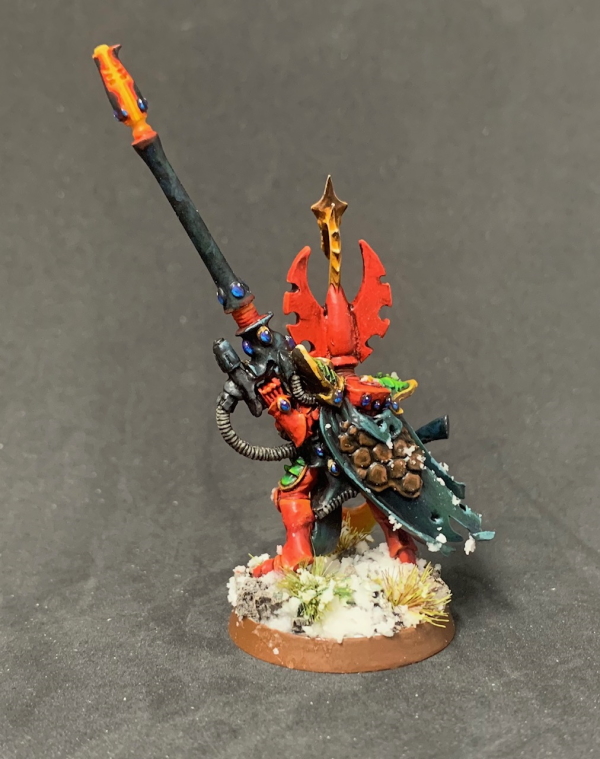 The original axe is rather puny and the arm holding it is, as mentioned, the worst part of the original sculpt.  I used an axe from the Wraithblades kit, and put it in a Dire Avenger exarch arm.  Both halves of the axe haft are pinned to the hand, carefully aligning them so they match up – then putty used to ensure the join and grip look natural.  The arm thus freed from it’s 2D plane can be positioned as needed, I chose to keep it at rest but still with a bit more movement and 3 dimensionality.

For the gun I did nothing apart from replace the weapon tip, which had snapped off, with one from somewhere else. It’s obviously some modern Eldar gun bit, but apart from this I have no idea where this bit is from, sorry!

Work on the torso was restricted to repairing the damage from cutting off Fuegan’s helmet. I really like the shoulder pad detail on the original and all the little dragon embellishments.  The legs were simply extended, in the same way as with the converted Asurmen – cutting off the original feet half way up the shin, then pinning lower legs and feet from Dire Avengers to give the model considerably more height and grace, before sculpting over these with more elaborate greaves and boots. 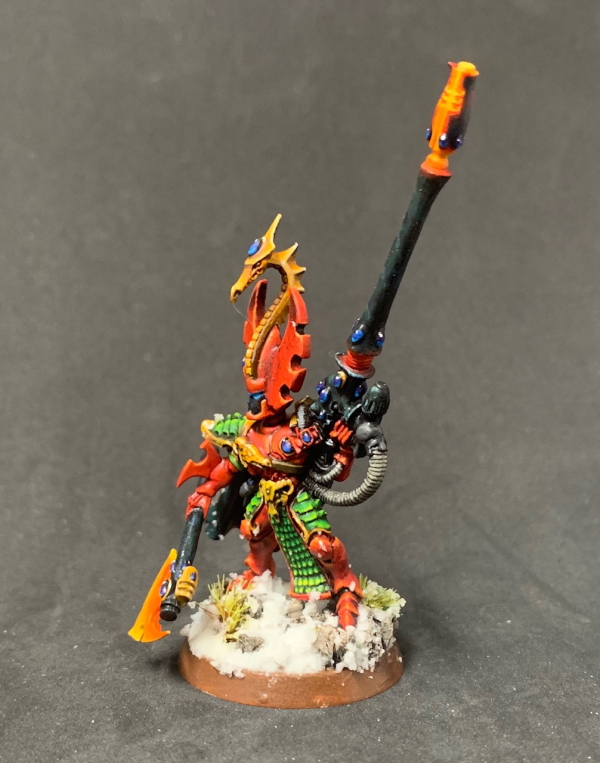 So there we go, another one finally finished (this conversion was started at the same time as Asurmen, i.e. 3 and a half years ago). I’m reasonably pleased with the job I did on this conversion, but as I was making it I thought of lots of ways to improve on what I was doing. In particularly if I started from scratch I’m not at all sold on what I did with the helmet, and I’d definitely have cut the model in half at the waste to give him some more height there are well.  I’m also not that happy with the paint job, which was rushed out for Yaktribe’s August “finish your stuff challenge”. In fact, alongside finishing this conversion, I also started to kitbash an entirely new version of Fuegan purely from other plastic bits to address what I didn’t like about this one, including a wraithcannon as the main body of the firepike.  No doubt that version may make it’s way onto this blog in due course, say, another 3 years?