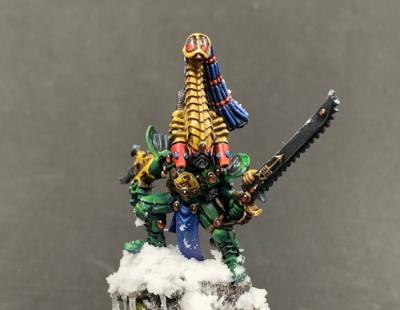 In my continuing quest to complete the entire Phoenix Court of Khaine for some imagined (and quite possibly never to happen) future Apocalypse mega battle, I arrived at Karandras.  Literallly the wielder of THE BIGGEST CHAINSWORD IN THE 41st MILLENNIUM (seriously, look at it – excepting fancy double handed chainswords, a.k.a eviscerators, I challenge you to find any other model with a chainsword that comes close).

In comparison to the ones I’ve done so far, Karandras is a relative paragon of miniature design, with a better pose and more natural anatomy. In fact, I could probably have built the stock model and he’d have compared well to my converted Asurmen and Fuegan. But, as you might expect for any model designed in the 1990’s, cast in metal with the casting restrictions of the time, it does still exhibit some of the same issues, particularly a quite flat 2d pose and a short right arm.

My overall concept for converting Karandras was inspired by the piece of classic art below, which depicts the Phoenix Lord stalking through shadowed corridors. 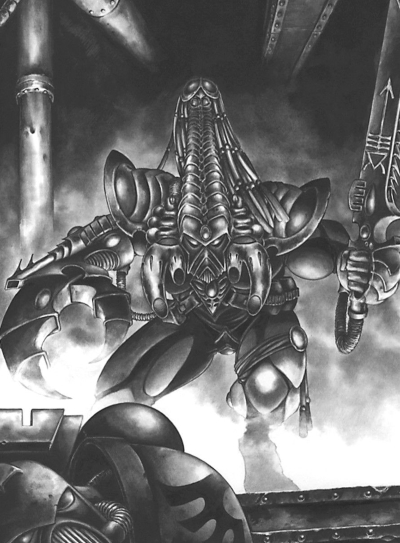 Whether I could achieve this exact pose was doubtful, but I wanted the converted model to play on how striking scorpions are supposed to function – ambushing, striking quickly from the shadows and so on.  This would mean a pretty big departure from the stock model, as (like most of the Phoenix Lords) it is sculpted in a classic at rest/surveying the battlefield pose. Also, there were a couple of details I wanted to modernise, and that short arm to fix. This is what I ended up with… 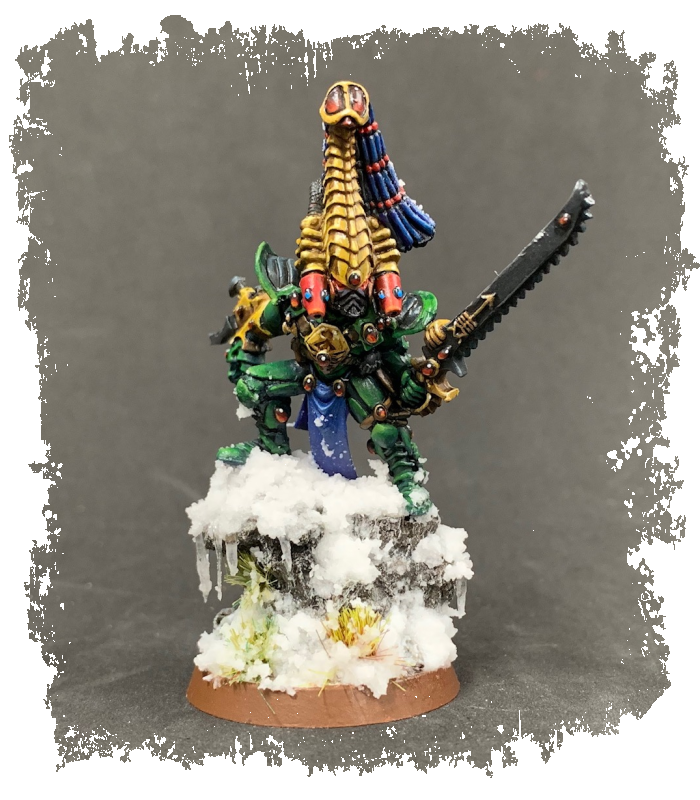 Karandras is my favourite Pheonix Lord conversion (so far) by quite some margin.  Here’s how I went about converting him…

Helmet
While I’m a fan of the HUGE chainsword Karandras carries, as I worked away on this conversion I became less and less enamoured of the almost comically oversized mandibles on the helmet. I know removing them takes away from the scorpion silhouette that the stock helmet has, but after a couple of weeks I decided to convert the head and took the plunge and cut them off. 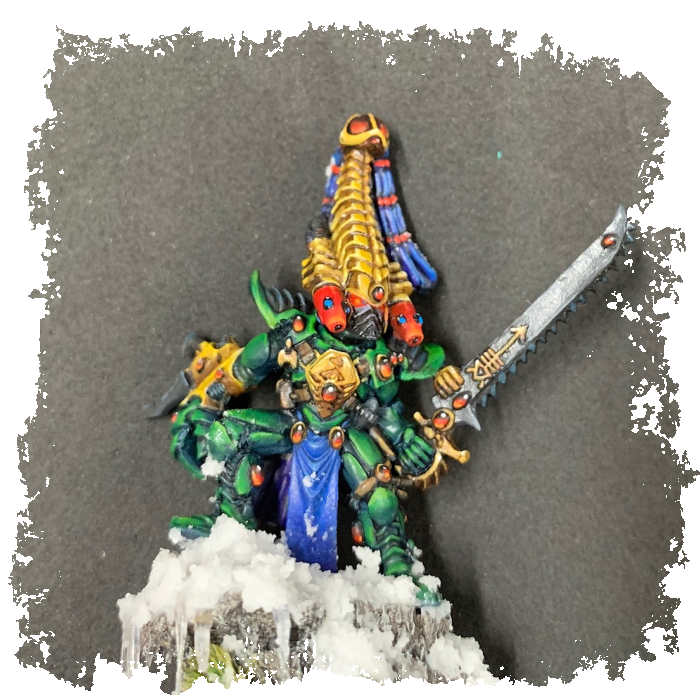 With careful cutting using a small hacksaw, clipping with some flat ended clippers and a bit of filing, the remnants of the inner mandibles can form the side panels of the helmet (a useful shortcut to avoid having to sculpt here). I then added a couple of cylindrical “nubbins” from some spare Wraithguard back vanes as the new mandibles. The head was glued looking downwards to accentuate the “striking from above” pose.

Arms
I did take a careful look at the potential to remove the left arm and repose it, but it’s pretty well integrated with the torso and leg, so I left it as is and tried to some extent to work around the arm with the pose. Much like Fuegan, the stock right arm is a bit stunted – once again Jes seems to have dropped the ball here (very unusual for such a talented miniature designer). It’s also very “2d” thanks to the casting constraints of the day. And, the shuriken catapult is of the old school rotary ammo type, which I wanted to modernise.
So, off came the right arm. I separated the gauntlet and claw from the upper arm, cut off the old catapult and replaced it with one from the storm guardians, blending it into the gauntlet with putty and mounting the ammo clip on top of the catapult. 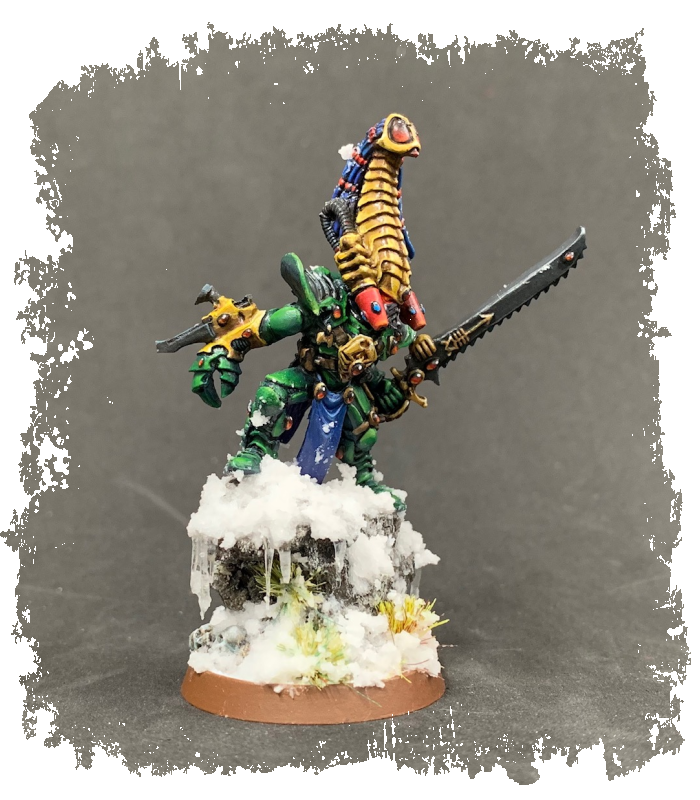 I pinned the lower arm to the body with a paper clip so I could experiment with various arm poses, then once I landed on one I fixed it in place with super glue and baking soda, which sets nearly instantly into a strong join so is perfect for this type of application. Then sculpted the upper arm in 3 stages (1/ basic shape, 2/ muscle form and cloth folds, 3/ armour panels).

Legs
In comparison to the other Phoenix Lords I worked on to date, Karandras has pretty long legs and overall as mentioned his pose is fine. But since I had this stalking/striking pose in mind, I cut off the right leg and then cut that at the knee. I pinned the knee and hip with a paper clip and then moved the model around until the pose looked right (using a big blob of white tack as a stand in for the eventual rock he’d be standing on), then cemented the join and pose by applying super glue and baking soda. Then I resculpted the joins with cloth and armour plates.
Karandras lacks any kind of cloth (robes, banners, loincloths or cloaks), but robes, sashes and loincloths are common to many Eldar models, and removing the arm left an unsightly remnant of ribbed pipe on the right hip.  So I cut and smoothed this down as best as I could and then trimmed a dire avenger sash to fit Karandras’ arse.  I then spent a few days prevaricating on whether to add loincloth as well and eventually decided yes. The part is from the wraithguard, cut short, and gently bent so it flows backwards between his legs. 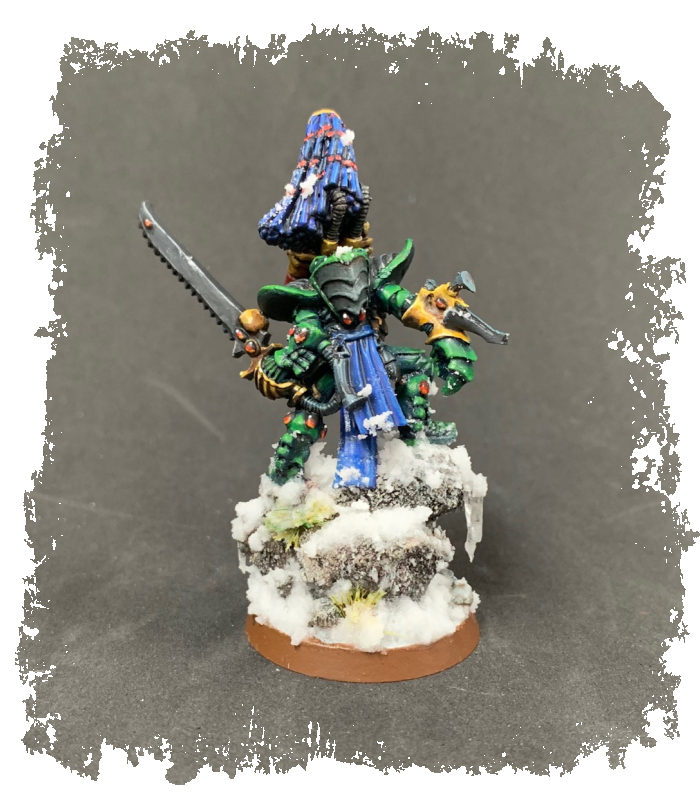 Some minor twisting of the left foot was needed to get the model to sit properly on the base, I do this by wrapping the part in a tissue wadding so it can be gripped with pliers without damaging the detail.

The Base
I used stones from the garden, piled up and stuck together with putty and superglue. For mounting strength the point where one foot meets the base had a piece of sprue integrated into it and the other was capped with a bit of putty, as I wasn’t sure about the structural integrity of the stones once drilled into. Most of the exposed faces of the rock had cork rocks glued to them and then liberal application of baking soda and fine gravel to integrate everything and cover up any dodgy bits of the construction. Obviously I put a few skulls around as well. Then I could drill the mounting holes and pin Karandras to the rock before applying icicles and snow.
The icicles are made by heating clear flying base spindles with a lighter, then stretching it out and cutting up into tiny icicles. The snow is the usual recipe of 50% white marble powder and 50% woodland scenics snow flock, mixed with woodland scenics realistic water until it’s got a clumpy texture.
« PREV
NEXT »