2022 has been a very slow year, modelling wise – obviously so when you consider that the last post (at the time of writing) was in February and that was about model trains.  I’ve managed just a handful of models per month at best, none of which have been particularly noteworthy or part of a project I’ve been documenting on this blog.

As for what I have painted this year, it’s been pretty much exclusively some of the original Hero Quest models (a project I do need to set up on the blog, as it’s close to my heart), and a variety of Eldar warlocks and farseers as part of a strange quest to own and paint one of every seer (released or otherwise) that Games Workshop have put out. That too will probably appear here sooner or later.

Today though in a fit of inspiration I finished Inquisitor Khronos. This is a kitbash I started at the beginning of 2018 and got close to finishing a year later in March 2019. I wrote about the majority of the build in this post. Clearly at some point between then and today I not only found a good head and shoulder pad for the model, but also based him and began painting. When I picked it up today, most of the base coats were blocked in and the gold was basically finished.

By far the biggest obstacle to completing this Inquisitor has been painting black armour – a problem I face on a number of different projects. I’ve been studying a lot of models by better painters and today I feel like I made a bit of a leap with this subject and once I had cracked the black armour to my satisfaction the rest came together quickly.

The solution for my problems with painting black armour seem to mainly be brighter highlights than I think I should use, and to apply many small patches of coloured glazes to take the armour away from being pure black and white.

For the highlights, this means being decisive about the points where light hit the armour and not being afraid to quickly blend or layer to almost pure white. The other edges on the armour have a mid grey line highlight or aren’t picked out at all, depending on prominence.

For the glazes, I used a green blue, a red and an orange and these are applied randomly in tiny splotches to tint the underlying black/grey and selectively knock back the bright highlights. While subtle, (and all but impossible to pick out in these photos), I really think this is a crucial step to lift a black surface and of course makes a lot of sense for anything that is supposed to be shiny. In future models I’ll use more logic when it comes to the placement of these mini glazes e.g. ensuring they reflect the colour of nearby surfaces.

There is a 3rd point that’s important for me but may not apply to everyone as it’s more about style, and that is the impressionistic approach and speed of painting. I didn’t care about smooth blending between highlighting or to hit every single edge. The highlighting is actually quite crude, almost comic book style, as there are only 3 grey tones used between pure black and the almost pure white. As a style it works for me and means I can realistically do all the armour highlighting on a model like this in 20-30 minutes. 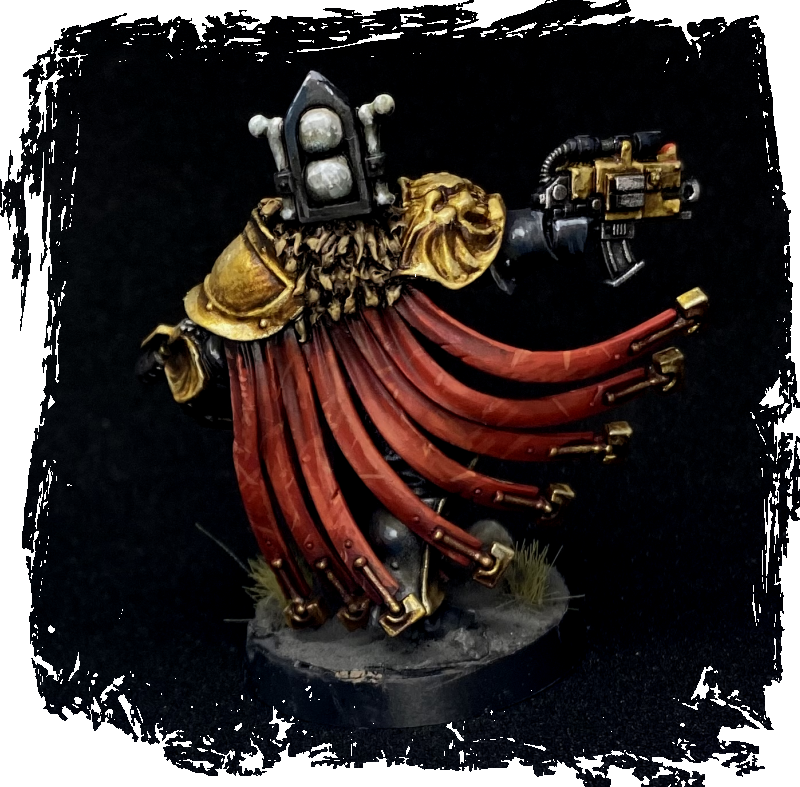 I like these cloak tassles very much. I sort of threw smooth layering to the wind and went with a more impressionistic (and far quicker) method of flicked highlights. 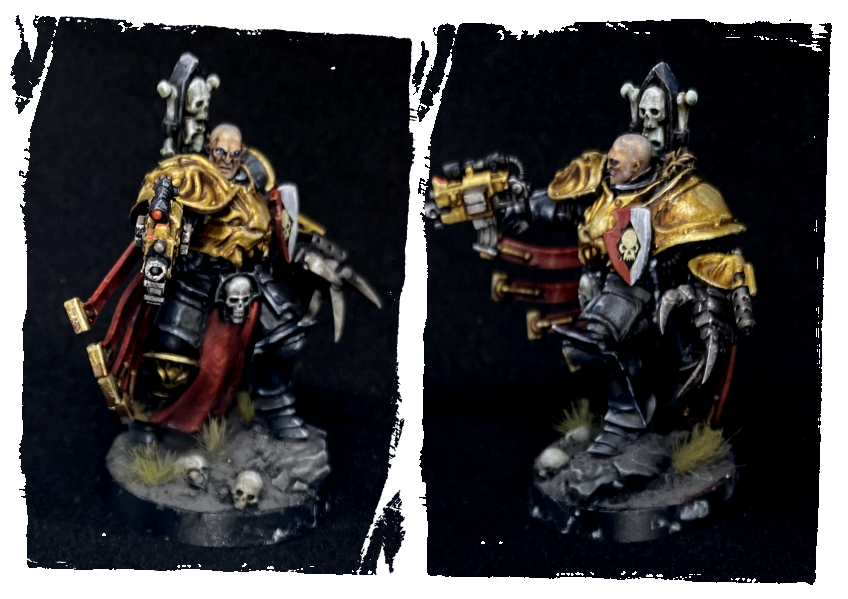 In general do feel like my painting continues to get worse – something I’ve mentioned before – presumably mainly due to me not practicing it as much.  I’m also far more willing to say “that’ll do” and take short cuts. For example, a past me might have attempted freehand on the tilt plate or loincloth but not any more. I might however revisit the model with some additional sculpted or bits box detail on the large blank shoulder pad. It’s screaming out for an Inquisitorial =I= somewhere!

I found it, see the PPS! 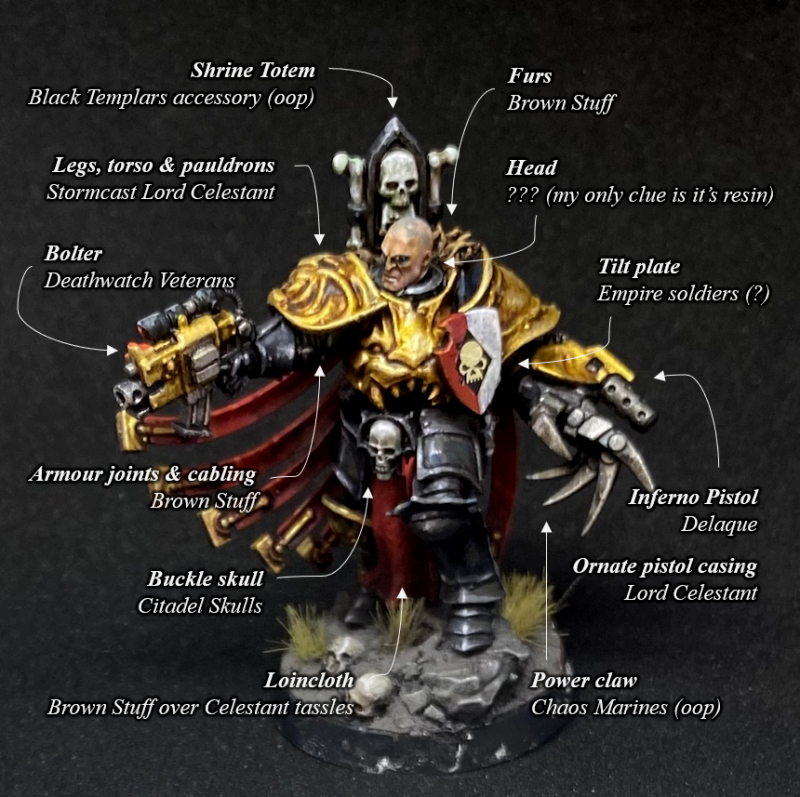 Post script – after a few days I decided I really wasn’t a fan of the tilt shield.  I also decided it was cowardly to not attempt any freehand at all, so today I went for it – cracked out the fine brush and the magnifying headset and attempted an Inquisition =I= on the tilt shield and loinloth, some checks and Khronos’ name in gilded letters across the shoulder pad. It’s an improvement overall and I’m reasonably happy with the freehand on the loincloth and checks – not so much the other =I= or the writing but this time it really will have to do! 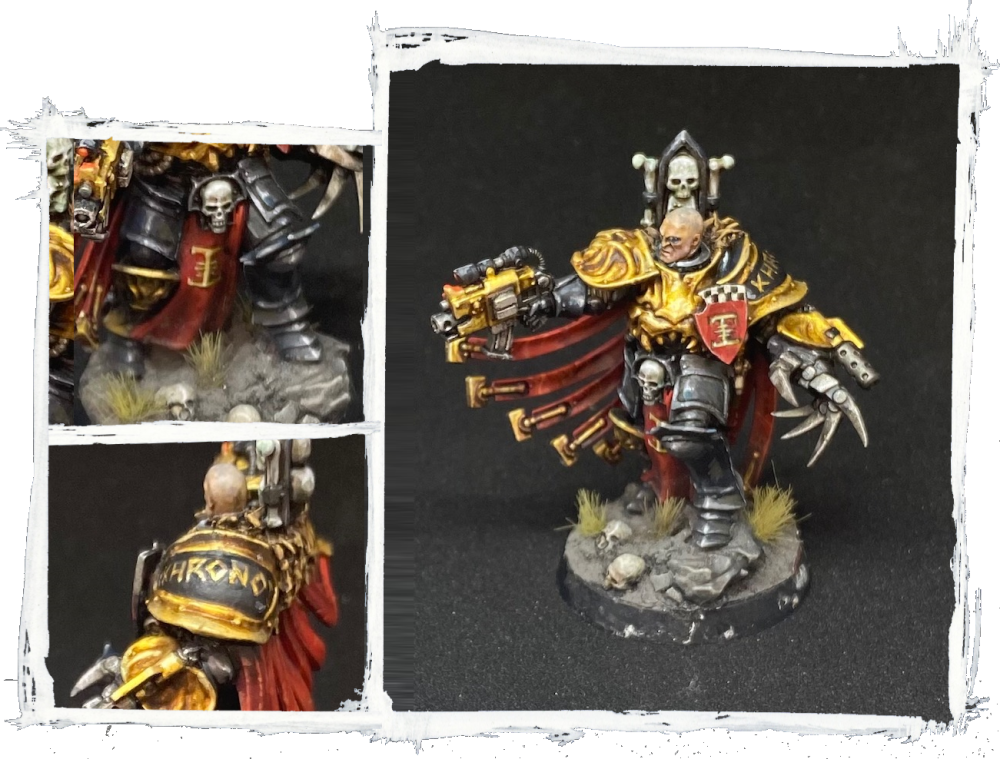 Few could match the devotion of Inquisitor Hybris Khronos of the Ordo Hereticus to The Imperium and, above all, to The Emperor.

The Inquisitor stood in his personal chamber aboard The Keres. It was late, the bed chamber lit sparsely by candles blessed by Saint Hephea. He wore a fine, purple embroidered night robe, tied loosely at the front, as he reflected on his good work.

In his time serving the Emperors most holy Ordo Hereticus, Khronos could tally at least seven cults claiming allegiance to some “greater good” or other that he had personally overseen the righteous destruction of.

But this… this was the most widespread of all. Spanning the entire planet of Colax IV, a populous so strayed from the light of the emperor as to be utterly unfathomable.

His superiors in the Ordo had unwisely forbidden the use of Exterminatus. Fortunately, the war had provided ample cover to obliterate the Hive he’d most suspected of being the epicentre of the coming rebellion anyway. It had proved simple enough to use his authority to teleport onto the orbiting Dictator Class cruiser, take the bridge and launch the bombardment. Not planetwide exterminatus, but satisfying nonetheless. After all, why spend years rooting out Heresy, when one can eradicate it utterly with the press of a button? He had, of course, executed the ships Admiral and command staff for failing to maintain control of their vessel, before scuttling the ship and teleporting back to the Keres.

His manhood twitched as he remembered the moment the Tantalus class photon bombs rained down on the Hive. He could see it from orbit. By the Emperor, he had felt it. Millions of vile and unworthy souls, evaporated in mere hours in the name of the master of mankind.

Not before some of the young men among the traitorous populous has been evacuated to his ship to be personally shown the light of the Emperor, of course…

He believed this particular incarnation of a Greater Good cult to be the work of the upstart Tau. Khronos spat involuntarily, and clenched his fists. The merest thought of mankind consorting with the alien made his flesh crawl and his bile rise.

Just then, a knock on his chamber door. Rylus. Rylus Tantalid. Descendent of none other than the Witchfinder Arnaud Tantalid, and one of his most promising students. While he lacked the righteous fury of his progenitor, he was a fine investigator, and what he didn’t know about the finer arts of vivisection and torture wasn’t worth knowing.

Rylus entered. “Sorry to disturb you, my liege, but I have discovered that Inquisitor Bane is in the Colax system. I thought you’d want to know as soon as possible.”

Khronos clenched his fists even tighter. Erasmus Bane! That malefic dabbler, that, that… traitor! That heretic!! He’d long suspected the Ordo Xenos Inquisitor of straying from the light, and recently that suspicion had hardened into near certainty. He’d not been able to muster any proof of Bane’s heresy yet, but as far as Khronos was concerned, he was Guilty until proven innocent.

With numerous cult cells no doubt still active amidst the ruins of the planet below, the possibility of the Tau agents responsible for fomenting the heresy still being at large, and Bane to track down too, he saw little reason to try and escape the Ulixes sector or risk a passage across the Cicatrix. He smiled. Yes. There was more than enough work for a loyal, devoted servant of The Emperor here. And who was more loyal and devoted than he, Inquisitor Hybris Khronos of the Ordo Hereticus?

“Pwepare the penitents. We will need their holy fuwy in the coming days.”

Rylus inclined his head and turned to leave his masters chamber.

“And Wylus? Bwing me another boy.” He gestured at the limp form strewn on the plush hides of his chamber floor. “This one is… used up. And I can feel the light of the Empewor coursing thwough me again.”