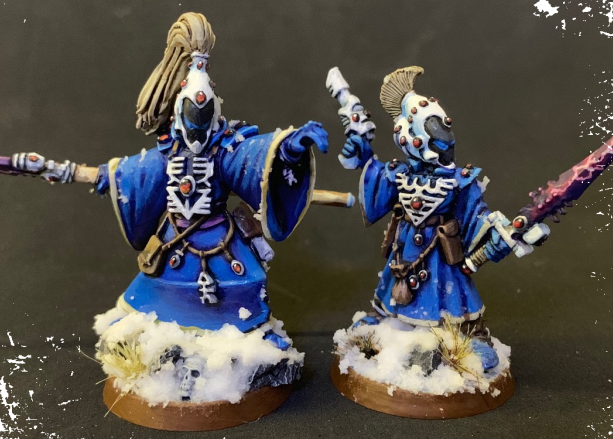 This is the final month of the 2019 Finish Your Stuff challenge so I decided to be true to the name and scoured my boxes of (mostly) started but unfinished models, some of which only required basing, and came up with a real grab bag of stuff,

I already wrote about the kit bash for Inquisitor Bane. This month I just finished the paint job and based him. Good to clear that one off the painting “to do” list considering how long it’s been since making it! 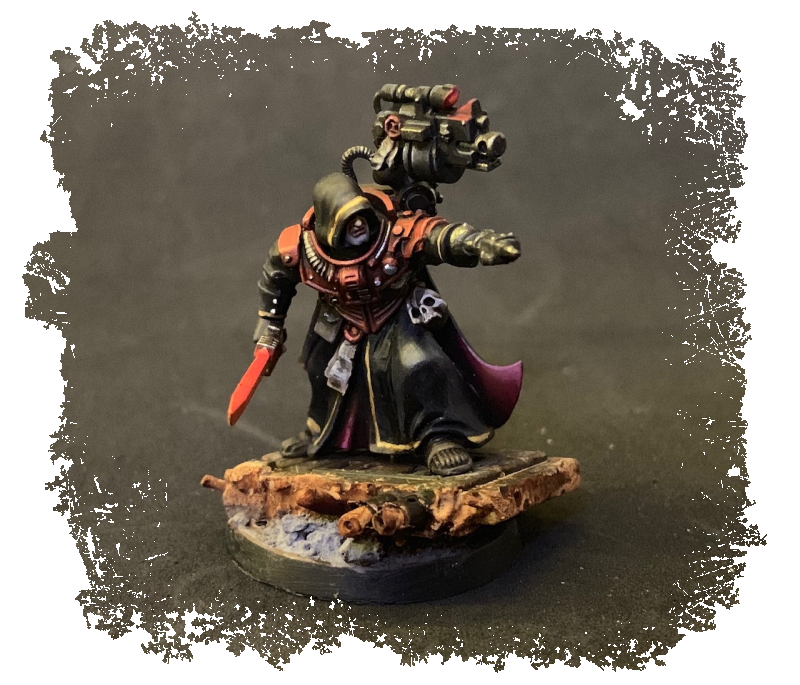 It’s a fairly standard Inquisition paint job – lots of black and red. Just a small touch of class courtesy of the gold piping on his robes, the lush magenta of the inside of his cloak, and of course the freehand Inquisition symbol.  And a grey wash over his chin hinting that Bane is no callow interrogator fresh out of the schola progenum. 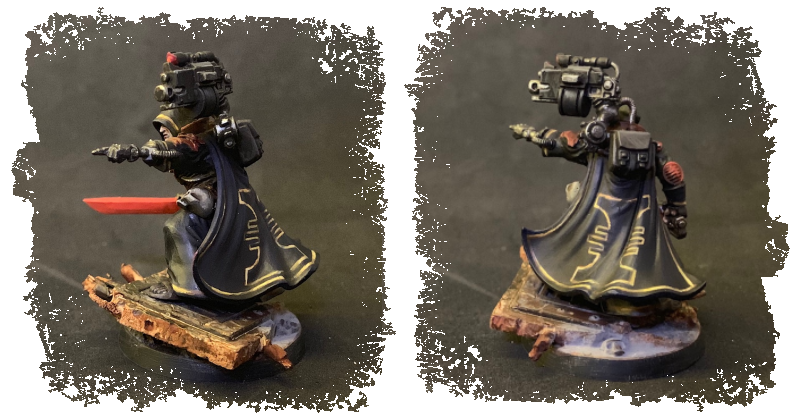 Here’s one that literally needed a base. Already wrote about this guy’s build over here. 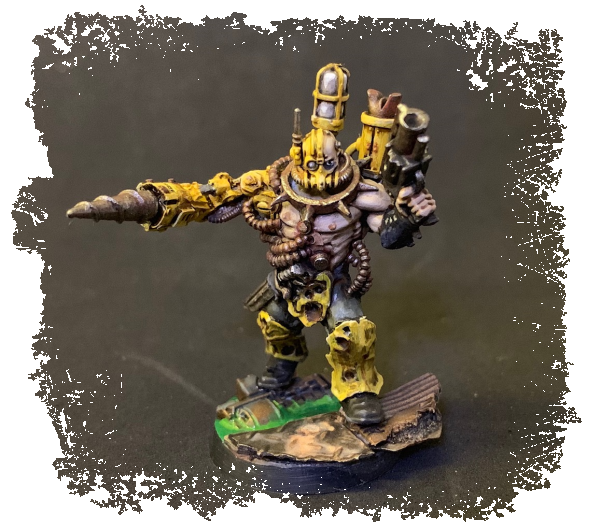 The conversion and paint job on this team is the subject of an entire project log – converted Blood Bowl Orcs.  About half the team is completely painted but has been sat in a box for years.  I decided to base the painted ones – at least this way I can get those into the display cabinet and possibly inspire myself to finish the rest of the team. I had prepared some grassy bases already but they didn’t look terribly exciting, so I made up these sandy earth bases instead.  The orangey yellow earth complements the team colour nicely.

Coming up with a method to do sandy bases convincingly was a challenge and I think worthy of a mini tutorial – how to make sandy desert/scrubland bases.

At some stage this year I realised that I’m not that far from owning and painting one of every Eldar Warlock model, so of course the completionist urge kicked in and decided to make that an actual thing.  This month I dug out two unpainted Warlocks – one of these is a little special as it has never been released officially. I believe it to be a test sculpt by Shane Hoyle, a foundry guy who sculpted two Warlocks as part of his application to the sculpting team. These Warlock’s are very cool models, and way back when I used to plog regularly on Warseer about my WIP Eldar army, a small number of opportunities to get hold of these casts came up. I guess I was reasonably well known as an Eldar guy on the painting forum there so was lucky enough to get some. 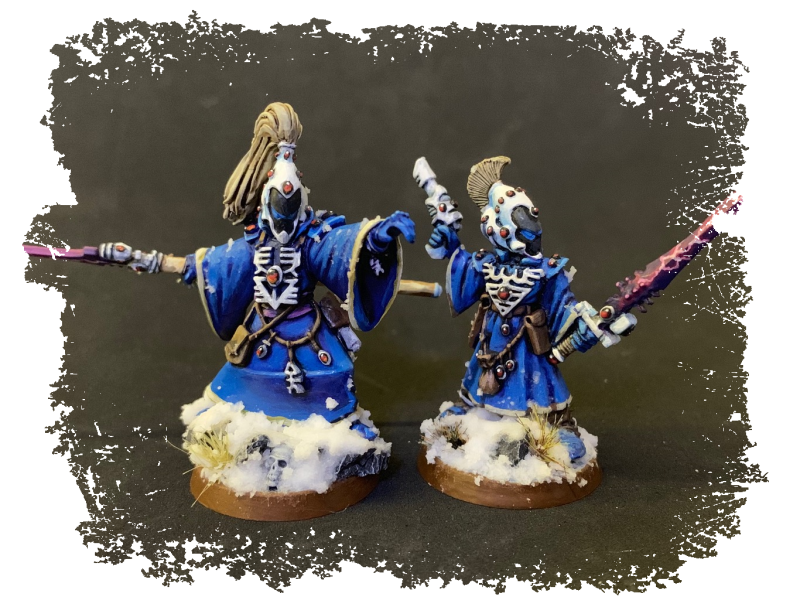 Despite their scarcity I have converted both. This one comes with a witchblade but it is a little on the chunky side. I replaced it with a singing spear/polearm witchblade made from a cut down wraithblade and some plasticard rod. I cut into the rod to make it look like a gnarled weapon haft. 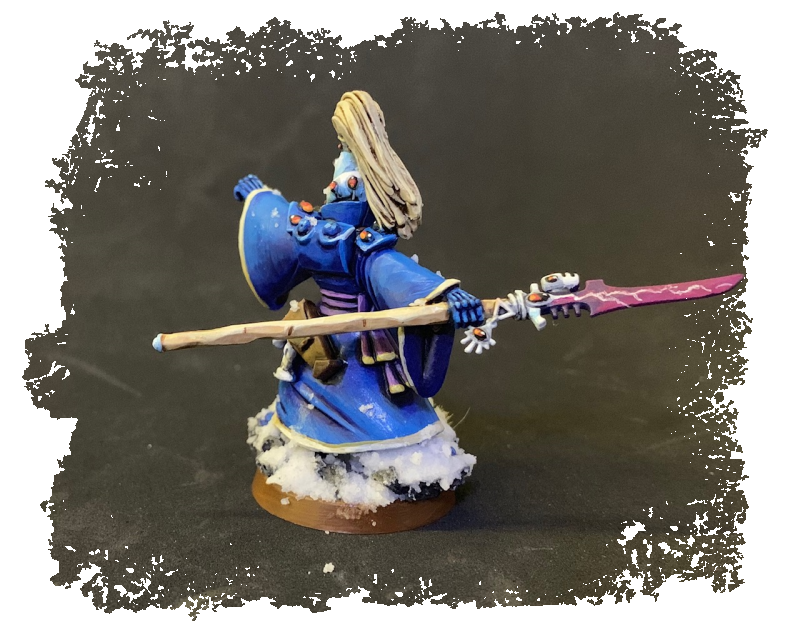 I think I have to get hold of 2-3 more 2nd edition sculpts to complete the set of warlocks.

Maugan Ra needed some final paint touch ups, transfers and a nice base. As luck would have it I found the original base I built for Asurmen, which I lost and ended up making a new version of for the Dire Avenger Phoenix Lord. 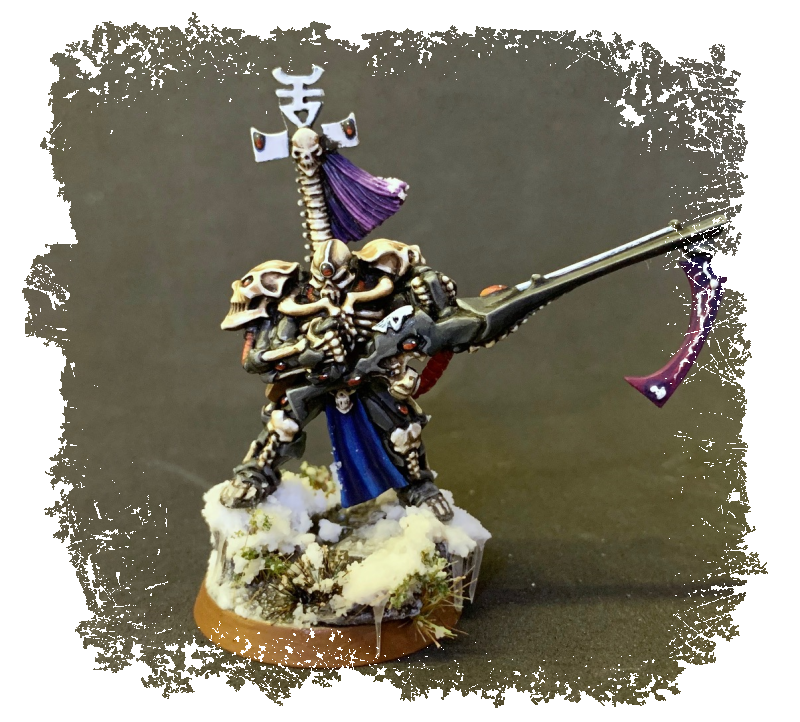 I obviously didn’t convert Maugan Ra – the base model is one of the best of the originals and has held up much better than the likes of Fuegan.  It’s also a much more ambitious conversion to take on due to the Maugetar being integral to the model. 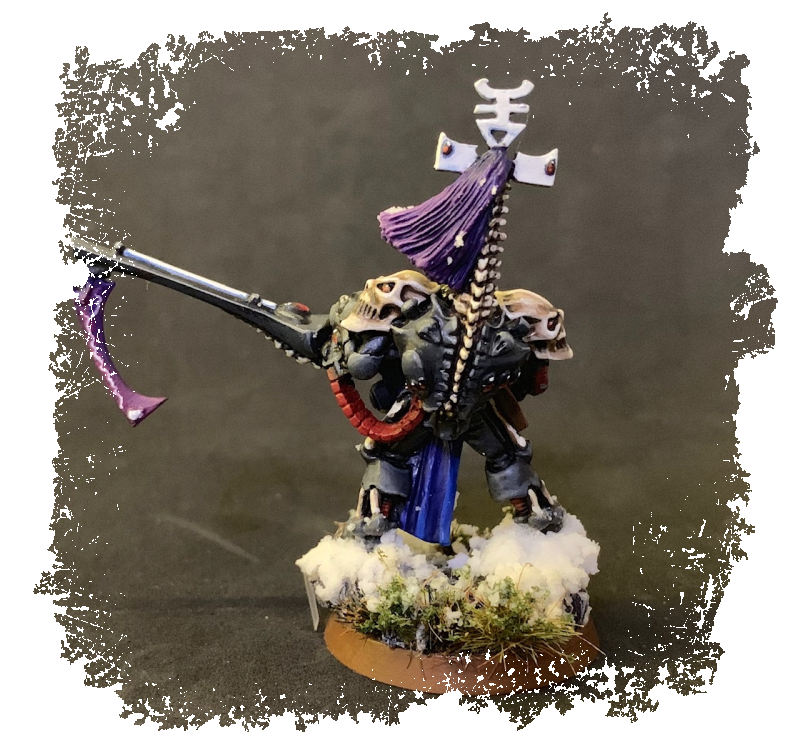